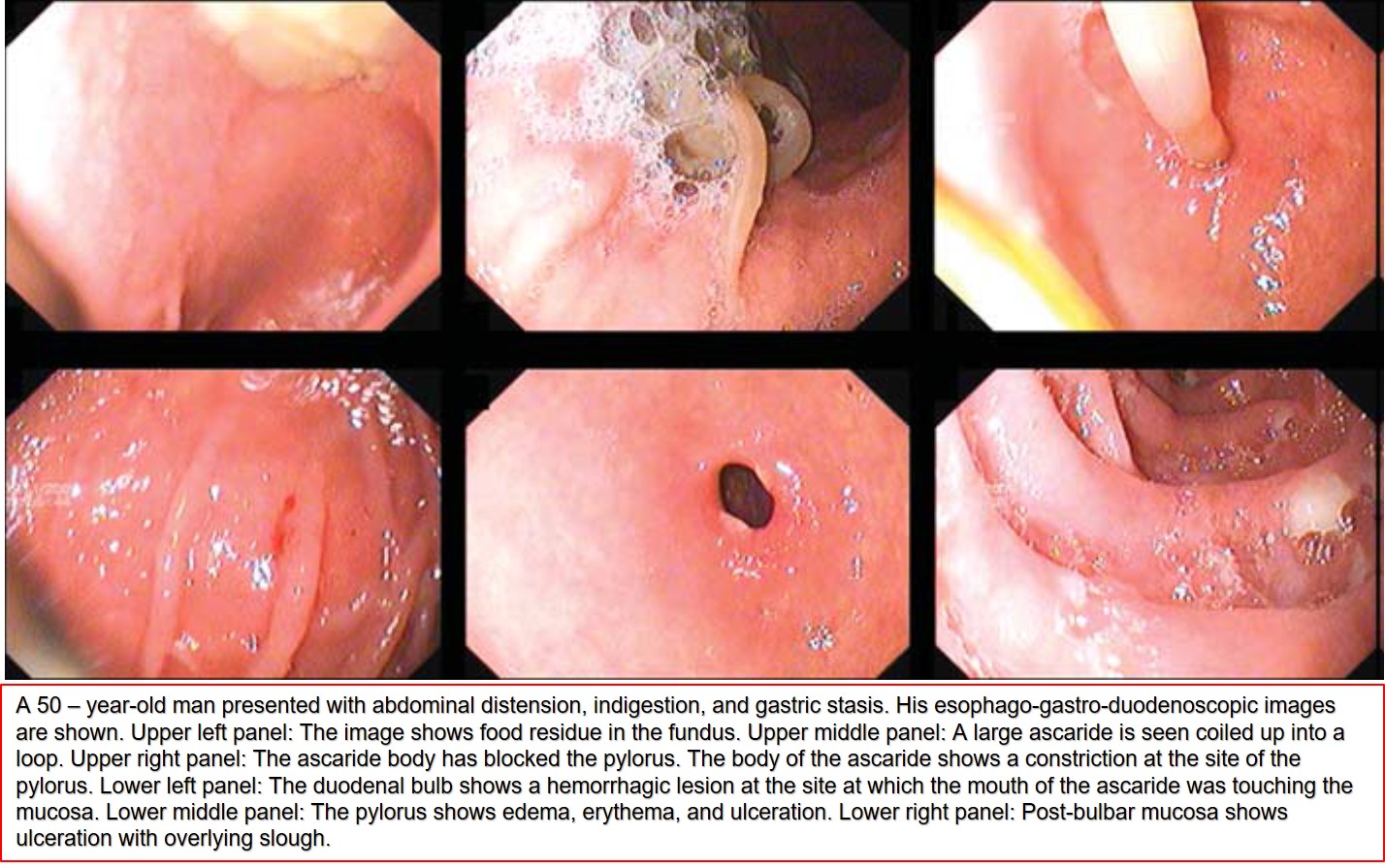 From June 2007 to November 2009, we performed 1522 Esophago-Gastro-Duodenoscopies (EGD) at our centre.   Worms were seen in the stomach in 22 patients (M: F 8:14; age 43.5± 10.4 years; age range 32 to 60 years). Symptom duration varied from 2 weeks to 6 years and symptoms were broadly divided in to 3 groups.   Five patients presented with features of gastric outlet obstruction which include delayed digestion, halitosis, and food staying in stomach for hours, vomiting, weight loss and distended stomach with gastric splash.  Cause of gastric stasis was due to a single live motile worm in the antrum blocking the tightly closed pylorus in 2 patients (Fig 1; video 1) and aggregated bunch of motile worms blocking the pyloro-duodenal area in 3 patients (video 2).  Eleven patients had retro-sternal irritation and a strong feeling of something moving in the lower chest especially during sleep. All these patients had actively motile worms placed in the fundus of the stomach and worms were seen entering cardiac orifice and esophagus.  We believe the symptoms were caused by movement of the worms in to esophagus in search of food especially at night. Three patients had repeated episodes of cough and chocking during night.   EGD showed worms in esophagus and fundus in one patient (Fig 2) and fundus of stomach in 2 patients. Remaining three patients had associated diseases as detected on EGD (Cirrhosis with esophageal varices and hypertensive gastropathy-1; Gastric carcinoma-1 and nodular lymphoid hyperplasia-1). Mucosa of stomach in 5 patients and duodenal bulb in 4 patients showed multiple hemorrhagic erosions.   These were localized lesions presumably caused by injury at the site the mouth of Ascaride was biting/holding the mucosa. None of the patients presented with manifest gastrointestinal bleeding. All patients remembered to have vomited worms during the illness.

All worms visualized during EGD were extracted out through mouth (video 1). This meant repeated endoscopic insertion in those with multiple worms. All patients received mebendazole therapy 100 mg twice per day for 3 days.  Patients were followed up from 1 to 30 months (mean±1SD 16.6± 6.4 months). Following worm extraction and anthelmintic medication patients had rapid relief of symptoms and stayed free of symptoms in the follow up. Most striking was disappearance of chocking in 3 patients. Patients with Ascaris-induced gastric outlet obstruction had rapid resolution of gastric stasis and with esophageal symptoms showed significant resolution of symptoms.

These data point to the fact that gastric ascariasis should be a common entity in regions of the World where this infection is endemic and presented with several dyspeptic symptoms. Gastric ascariasis has been reported to cause chronic intermittent gastric outlet obstruction in several case reports (2-4).   However intense retro-sternal irritation and choking at night were unique symptoms and not reported in the literature, although ascariasis has been considered in differential diagnosis of peptic ulcer disease, esophageal and gastric bleeding (5, 6).

Management of gastric ascariasis is based on 2 simple principles, one to extract the offending worms and second to institute effective anthelmintic therapy so that worms downstream in jejunum do not travel upstream. All our patients had effective relief of symptoms and pointed to cause of symptoms by the parasite. Dyspepsia is a common symptom in the community. As a significant percentage of dyspeptic patients had gastric ascariasis, this entity should be considered as a differential diagnosis of dyspepsia in endemic regions.